Our last camper, Humphrey, was a homemade Nissan NV van. We had a blast designing the layout, building the bed/couch and even sewed the pads. When we upgraded to our Four Wheel Camper - Fleet model, we opted to have FWC build out the pop-up camper for us. One option we didn't pick was the cold weather thermal pack. The material of our pop-up camper is a marine style vinyl side liner. We didn't use any insulation in our van, so we thought this would be okay. We did select the forced air heater that runs off our propane. LOVE IT!!

Our last camping to eastern Arizona was colder than we expected in the low 20's. During a walk at Chiricahua National Monument campground, we ran into a fellow Four Wheel Camper. He had created a wrap for the outside of his camper from reflectix. That began our search for alternatives for a thermal pack. We found it on Wander the West.com from an old post by ski3pin in Nov 2011.

We spent $129 to buy the material from Seattle Fabrics online. We ordered FEV 54" Evolutin IV/Block it 400 @ $12.50 per linear yards. I have been wanting to buy a sewing machine for awhile.  I had to borrow one from my good friend Cathy to make the cushions for our van back in 2012. So, with the cost of the sewing machine, we are still spending less than 1/2 the price of buying the custom liner from FWC.

We are happy so far and notice a big difference in the temperature inside the camper. We still need to hem the liner and attach the velcro to the liner. For now, we are just using the liner with large binder clips which also works.

I will do a follow-up blog once we have hemmed, attached the velcro and tested it in the wild. I also need to create openings in the lining so we can open the windows even with the thermal pack on.

I've been wanting a sewing machine for awhile now because I also want to mend clothes. We like to wear things until they are not usable anymore. The sewing machine will make this much easier.

We use Amazon Prime

rvsue and her canine crew

WatsonsWander - Exploring and working fulltime from our Airstream

Rolling in a RV - Wheelchair Traveling 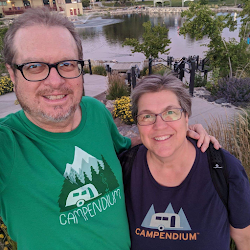